Time for another “old man shakes fist at sky” moment.

[several deleted attempts to justify why this time you should engage with safe guarding your privacy, and how i’m moving personal communications away from mail]

How about you get it installed:

Trust is in short supply these days. Trust that you can express yourself freely.

My continuing struggle to get the almighty Google at arms length…

Maps has been one of those applications that just seemed impossible to replace. The investment required to pull together and maintain all that map data… never going to happen. And then: 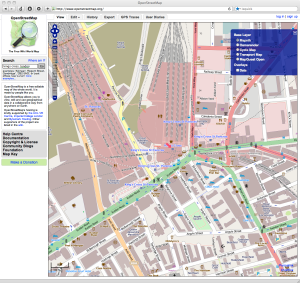 OpenStreetMap.org, which has a bunch of alternative map providers, and can be updated (to what extent, i’m not really sure) by users. The UI is using the tiled ‘drag to scroll’ metaphor that seems to be the current state of the art for mapping. It’s probably not yet the answer if you’re in Japan (the maps are there, but the search doesn’t seem to cope with kanji input), but maybe someone will take an interest and tidy things up.

The other recent experiment is ixQuick. A European search engine, that has a proper privacy policy, and offers some interesting proxying options. The last time i played with it, several years ago, it’s search results weren’t up to much. Looking at them now, it would appear to be better than DuckDuckGo, and maybe as useful as Google when they were focused on general search. As with every alternative, it’s not as fast as Google but it’s bearable. Sub-second search just isn’t worth that much to me i guess…

Finally, Glims gives me a way to change the default search provider, and configure other search providers as needs. The install is also rather nice as it gives you an option that installs only the bits you might be interested it. This is good as Glims seems to be one of those ‘do *everything*!!’ plugins.

In reaction to the last post, Sven noted that by default my ISP is probably tracking all of my web traffic. I’ve no idea what the law requires of ISPs in Japan, but it seems quite likely that there are very few protections for citizens, and a lot of snooping going on…

There are two parts to this:

– nameserver lookups–if my ISP is logging all lookups then obviously that’s a risk. In order to get around that i’ll need to either run a local DNS (urgh, no doubt there is a lot to learn there…), or find a DNS service provider that a) has a reasonable data retention policy b) is trustworthy.

– regular traffic–the ISP could easily be logging all of the requests that i make. If there is a host out there that i do trust as an exit point (trust not to maintain a log of my activity) then running a VPN / tunnel to that point would be acceptable. At best my local ISP would know that i was communicating with the VPN host, but would know nothing about the traffic moving through the VPN. Unfortunately i don’t have access to such a VPN host, and given the traffic costs involved, can’t imagine that they are out there and cheap to use.

The other option is to use Tor. I’m still rather reluctant to do this… it seems like it may well be a step to far (similar to contemplating running a DNS server…) given that i’m not actually attempting to do anything illegal, or actively evade detection. My only goal here is see if it’s possible to opt out of a system of pervasive surveillance and monetization of my activity.

I’ll set up Tor and see how unbearable it makes life… running an exit node is out of the question given how little i know about the state of Japanese ‘net surveillance. The last thing i’d want to be doing is to be unknowingly feeding the machine.