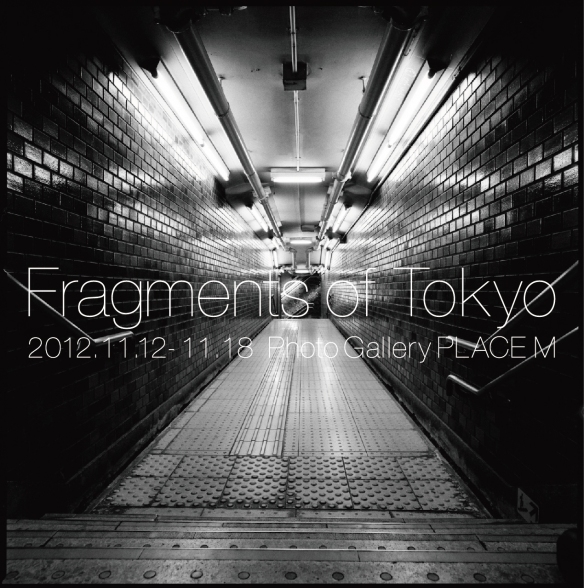 It that time again! Next week the third Fragments of Tokyo exhibition will be hanging at the Place M Gallery in Shinjuku, Tokyo. We had planned for this year to be five members, Toshiya Watanabe, Thomas Orand, Diarou Koga, Sean Wood, and myself, but somewhere along the way Koga-san gained a son (congratulations!) and we lost a contributor. The end result is that we’re still doing a four man show and hopefully we have enough photography to make it worth making the trip to the gallery.

My contribution this year is a little reduced, just six prints. But, they are, in my opinion, six very nicely printed pieces. As i’m a beginner in the darkroom, and really didn’t have time to focus on improving (it has been a busy year…), they’ve been done professionally by Larry at Lazurus Fine Print.

And, i just got back from Japan two weeks ago. Which means that sadly i won’t be there for the show. It feels a little odd to be doing this and not turning up, but it’s just the way that things worked out this year.

Anyway, please visit the show if you can. There will be an event next Saturday (pretty sure) where everyone else will be there. Maybe even Koga-san!

What a week! Last night we took the exhibition down, packed it all up, and went home… after a few beers.

It has been a great experience, and good to have so many people turn out. Don’t really know how many people we got through the door.

On the three days that i was there, there wasn’t a quiet moment… actually, around 6:30 last night, watanabe-san and i were the only ones in the gallery, we both thought it was all over. The relief was cut short by a couple of swedish photographers that we’d met in Golden Gai the night before, followed by a posse of drunk Mg’ers.

I’ve learned a couple of good lessons: everybody likes different shots, you have to get over all ideas you might have about which ones will be popular; pulling a series out of the mess on flickr, getting a consistent set of shots, really helps you see them for what they are; talking to people about photography for hours several days in a row takes it out of you!

The show as a whole came together really well. Even though we worked from a very loose theme, the four sets of pictures worked well together. That was luck, as we certainly didn’t plan it…

Wouldn’t say that, right now, i’m looking forward to doing it again, but give a few months and that’ll probably change. It’ll certainly be nice to get out there and shoot again without having this hanging over me.

For those of you who couldn’t make it, i’ve posted my shots on the Magnesium site. Will have to see if the others are going to do something similar. If so i’ll send out links.

My first photography exhibition is opening next week, Monday, 8th of February, and is up until Sunday, the 14th.

We are having a little soiree on Thursday afternoon (what is a soiree in the afternoon called?), the 11th. It’s a national holiday (建国記念日 – founding of the nation day) so hopefully a few people will be able to drop by, have a glass of wine, and a chat. The gallery (Place M) is open from 1pm, but that’s not a particularly civilised time to start drinking… so how about 3pm? Oh, and don’t get your hopes up, we’re not – so there won’t be cases of wine!

I’m putting up nine pictures… or maybe ten… or eight… won’t really know until i see them on the wall. It has been quite the experience getting from negatives to getting A2 prints hung on a wall. Along the way i’ve lost a little sleep, worried and drunk too much, and acquired a printer. Here’s hoping that it’ll be easier next time… assuming there is a “next time”.

Edit: also, this, which Watanabe-san kindly made as banner ad, but we don’t have anywhere to use it: