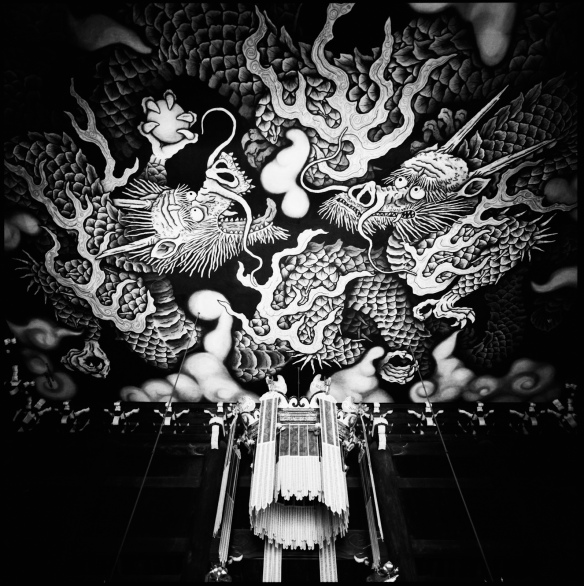 In the Dharma Hall of kennin-ji, the oldest zen temple in kyoto.

I’ve been watching these graphs for a few days:

This is the time series taken closest to our place. The live graph (at the link above allows you to read the values off at certain times. There are three points we’re interested in 1) on the far left you can just see the background level, we can read this off as approximately 40nGy/h; 2) in the middle of the graph there is a peak, this is roughly 150; 3) the latest reading which is around 130.

What we’d like to know is it this radiation is due to Iodine-131, with a half-life of 8 days, what would be expect the level to be? There are a bunch of handy half-life calculations, but the one for which we can easily plug in all the numbers is:

Which matches up rather nicely with what we see on the graph, a reading of 130 (minus the ~40, to account for the background level).

This makes me feel a little better about my theory that the higher radiation levels that we are seeing now are due to the Iodine-131 released into the atmosphere last week, and subsequently washed back out again when the rains started back on Monday.

[Disclaimer: i’m not a nuclear scientist / radiation specialist. Consequently, you should not take anything away from these calculations other than the sad fact that doing them cheered me up immensely.]

The bad news: NHK (along with everyone else) is reporting that elevated levels of Iodine-131 have been found in the Tokyo drinking water supply. This currently applies to all 23 districts of Tokyo and 5 other towns, that presumably get their water from the same supply.

The good news: the level, while above safety standards for infants (100Bq/kg), is below the limit considered safe for adults (300Bq/kg). Providing bottled water for infants is something that can be done; for a whole city it’s a real challenge.

The other good news: the half-life of Iodine-131 is 8 days, meaning that a week from now, assuming no new releases, the level will have halved. If we were seeing significant levels of Caesium-137 it’d be much more of a concern, as it has a much longer half-life (~30 years). More thoughts on this below.

It was to some extent inevitable that this would happen. There were times last week when the reactors were venting radioactive materials into the atmosphere. Despite the majority of the plume being carried out over the pacific, some of it did turn up in Tokyo. There were several noticeable spikes in radiation levels. The rain over the last couple of days has probably washed a lot of this material out of the atmosphere, and into the water supply (rivers). In fact we’re still seeing elevated radiation levels in Kanagawa. They aren’t high, but they are 2 – 3 times higher than they were before they rain came. See here for fancy graphs of the levels at various places around me.

To the best of my knowledge, there have been no major new releases of radioactive material into the atmosphere since the issues with reactor temperatures early last week. Even though the radiation levels at the plant remain high, this is not the same as radioactive material being pushed out in steam / explosions / fires.

Obviously it a worry that radioactive material is getting into the food / water supply – ingesting it brings it much closer to your body (much much closer in the case of your lungs…) and in this case the inverse square law isn’t on our side. However, the concentrations are still very low, and your body is generally pretty good at repairing / terminating damaged cells.

[As you’ve probably surmised i’m writing more because the constant stream of bad news is making me increasingly jumpy. Getting stuff written down, researching a few of the facts and figures forces me to be rational and take better stock of the siutation.]

I’ll tell you what’s pissing me off about the Fukushima situation: not knowing what to believe. As Mr. Bowie once whined, “i don’t want knowledge, i want certainty!”, and i’m starting to come around to that way of thinking… amusingly <cough>, this was in a track titled, ‘Law (Earthling on Fire)’.

Trying to make sense of a bunch of heat maps that show that Reactor 4 is 42ºC, and a report that suggests that the stored fuel pool in the same reactor has boiled dry.

“There is no water in the spent fuel pool and we believe that radiation levels are extremely high, which could possibly impact the ability to take corrective measures,” NRC Chairman Gregory Jaczko said Wednesday at a U.S. House Energy and Commerce subcommittee hearing.

Such a situation would produce a fair amount of heat. Things like the Zirconium alloy housing of the fuel rods burn at something like 1200ºC, which would presumably show up on a heat map… rather brightly.

What we really need is for Tepco to restore electricity to these reactors and to start releasing a steady stream of sensor data. Despite being completely unqualified to analyse such a data feed, i’d still feel better knowing that someone could look at the data and tell the likes of Mr. Jaczko to STFU.

Edit: and while were at it, the piece on Zerohedge (from which i culled the above image) breathlessly reports that there is a “blistering 128 degrees celsius zone”. It’s a good job they don’t realise that they were running at hundreds of degrees early last week…

I’ve put a couple of prints up in the flickr Charity Print Auction pool.

More importantly i’m also encouraging my circle of photographer friends to do the same. Come along chaps!

Earthquakes and nuclear power just don’t mix. You can’t build nuclear facilities in safe areas in Japan – there aren’t any. You can’t safely store spent fuel in a land with volcanoes and earthquakes. Obvious stuff really…

And, yet here we are. There are nuclear power plants all over Japan. Some of them built on fault lines. Many on the coast (with subsequent access to water for cooling) and therefore liable to swamping by tsunamis.

Building a nuclear plant to survive Magnitude 8.2 quakes, and n meter tsunamis is just an invitation to nature to make you look stupid. Oddly enough, that’s what happened. Quakes of roughly five times the power (magnitude is a log scale…), and tsunamis of 10m swamped Fukushima.

Surviving the quake itself is quite an achievement, but it’s a hollow victory when the plant is subsequently swamped by the sea. Being confident in your defenses, to the point of locating your emergency power in a low lying area, with power switching in a basement liable to flooding, is just asking to be humbled by nature.

Consequently, here we are with three nuclear reactors that have gone into meltdown. Since late on Friday the situation has pretty much gone from bad to worse. One by one the emergency cooling of the reactors has gone offline. This has caused the fuel rods to be partially, or in the case of reactor 2, completely out of coolant water.

Even with control rods inserted this increases the temperature and pressure in the containment vesselsis raised to the point where it has been impossible to pump in sea water (the only reliable source of cooling). In order to relieve this pressure steam from containment vessel has been vented, releasing radioactive materials (Caesium 137, Iodine 131) from the high temperature fuel, into the atmosphere.

Mixed in is also Hydrogen (released when the Zirconium alloy that is used to house the Uranium fuel pellets is heated above something like 1500ºC) that when mixed with Oxygen is highly explosive. This is what has caused the two explosions that blew away the buildings surrounding the secondary containment. What we’ve been told is that neither of these explosions has damaged the primary of secondary containment of the reactors.

As things stand two of the three reactors have been bought under control. They are being cooled with sea water and poisoned with Boric Acid. This indicates that they are going to be decommissioned, as the corrosive effects on anything other than de-ionised water render the reactor vessel unusable.

The third reactor came very close to boiling dry last night, and was still at an elevated pressure this morning. Unless they have been extremely lucky this means the fuel has completely melted down, and is lying at the bottom of the primary containment. This is going to make the task of cooling it a lot harder.

As long as the operators have control over the mechanisms for releasing pressure the situation can probably be maintained. However, if the fuel is now lying in a heap at the bottom of the containment vessel it seems likely that it’ll eventually get to a temperature when it melts through the steel primary containment and leaks out into the secondary containment. The design is presumably such that the fuel is spread out, but with each line of defense that falls we get a little closer to disaster situation of Uranium getting out into the environment.

This morning the government has announced that it will be working more closely with Tepco. The implication is that Tepco hasn’t been sufficiently forthcoming with information, which given their record isn’t entirely surprising.

Rather surprisingly i’ve managed to stay somewhat doggedly optimistic that the situation will be resolved. At this point we’re teetering on the edge a little. In any other situation having two out of three stabilized would be good sign, but this last one is making me extremely nervous.

[Edit: this was written purely as an exercise in calming down. Saying all this stuff, attempting to stay rational, and digest what i’ve read, is my way of coping.

If you have questions you’re probably better off asking them elsewhere. I’m by no means a nuclear expert, and remain a committed sceptic of the entire industry.

Update: things have again got worse and an explosion in the secondary containment of reactor 2 has released more radiation into the environment. It’s no longer clear if the primary containment retains intact (at least nobody seems to have very much information) but there was some talk in a confused Tepco press conference that the pressure was still ‘within parameters’. The area in which people should stay inside, or take precautions if they are outside has been widened to 30km.]

Not that you’d know…

They had better be planning to remove those flowers…

at least, it will be when all that pesky stuff about finding to somewhere to live is sorted out.